Family vacation on the wallpaper! Prio one: the kids should have a good time. And how do they have it, after all, there will be fun things to do and spaces for them to do it. And there should be good bathing opportunities (point out the child who does not like water play, they may be there but are not many!).

Because I'm about to report MSC Cruises and last spring MSC Seaview- cruise right now, so I thought about trying a small comparison of the water parks on the company's newest and largest ship. The last MSC ship I cruised with was MSC Grandiosa, the latest MSC ship where I am crossed with the family was MSC Seaview. OK, let's compare these two classes - the Seaside class and Meraviglia (although MSC Grandiosa is larger and thus belongs to a class called Meraviglia Plus).

The Meraviglia class belongs MSC Meraviglia, MSC Bellissima and the slightly larger vessel MSC Grandiosa (in the autumn also comes MSC Virtuosa, also a Meraviglia Plus vessel). I have been on board all these ships, and the children have, as I said, tested and played at MSC Meraviglia. So, how was it?

Great! Their water park Polar Aquapark goes in blue-white polar style and here are both killer whales and other figures to climb. In the middle is a pool surrounded by water cannons that the kids loved to spray down with each other (okay, most little brother on big brother which he got to his luck ;-)). There are also three water slides where you go in rings in two of them, as well as a mini can for the little ones. 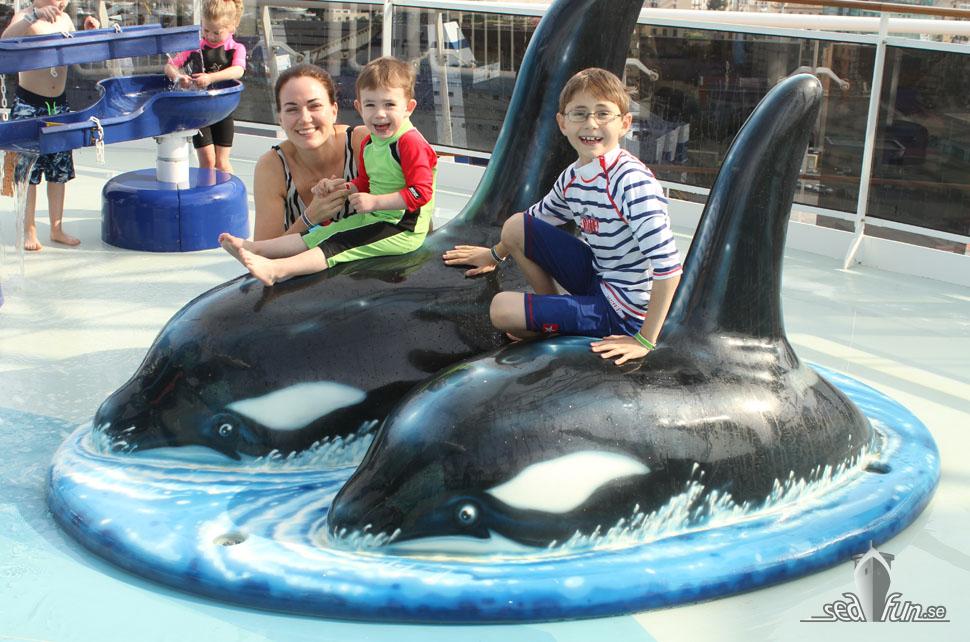 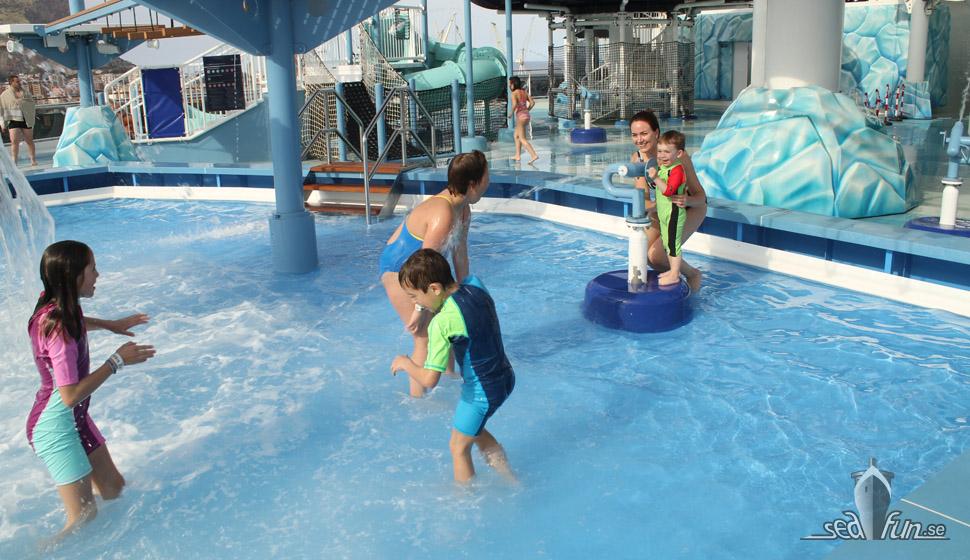 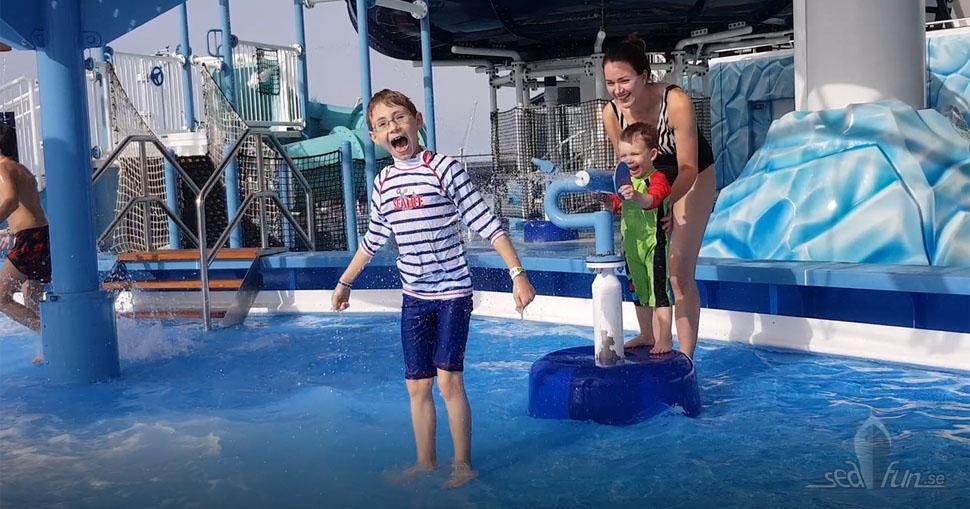 At one end there is also a gutter with water in which you can play, stop the flow of water and release it again - this is what our oldest guy loves! A high-altitude track extends around and above everything and on one side is a glass kiosk. 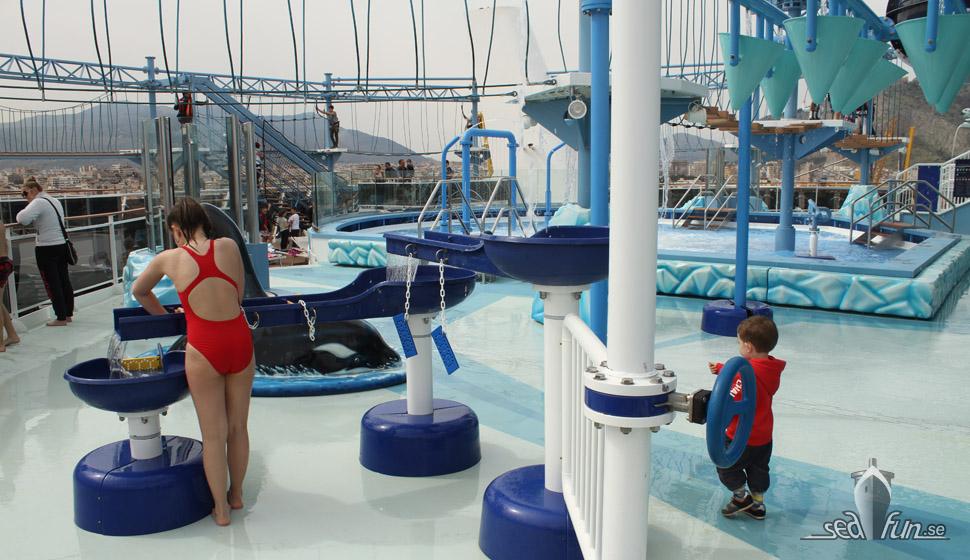 What was good about this area was partly that it was in a separate part of the ship so the children really did not disturb anyone, this space was entirely intended for them (and others who wanted to play, adults may of course also go canoes as well as walk the high altitude course). The water slides (at least the ones with rings, the third was closed when we were aboard) were also so kind that even younger children managed them (though not our youngest son but he wasn't even 3 at this time). The water in the pool was also heated and fully "bathable". 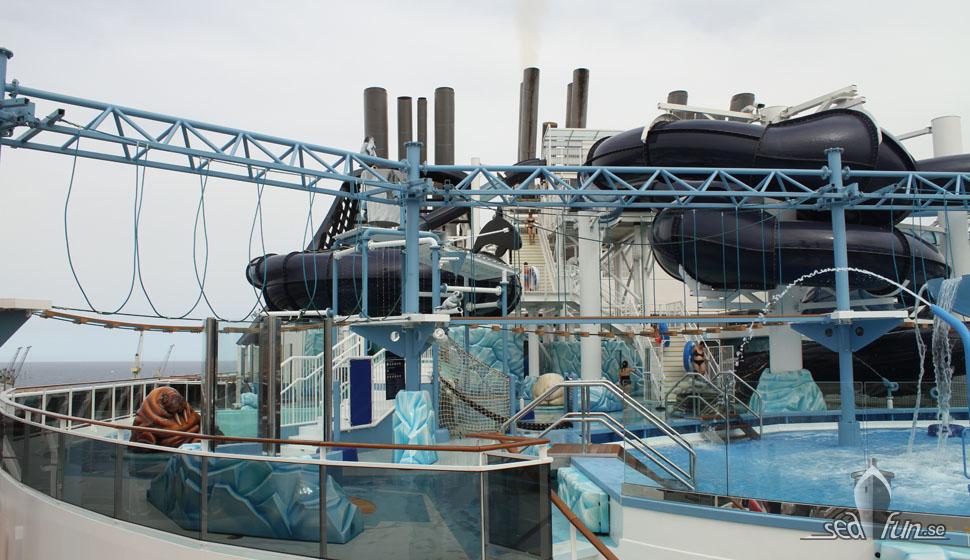 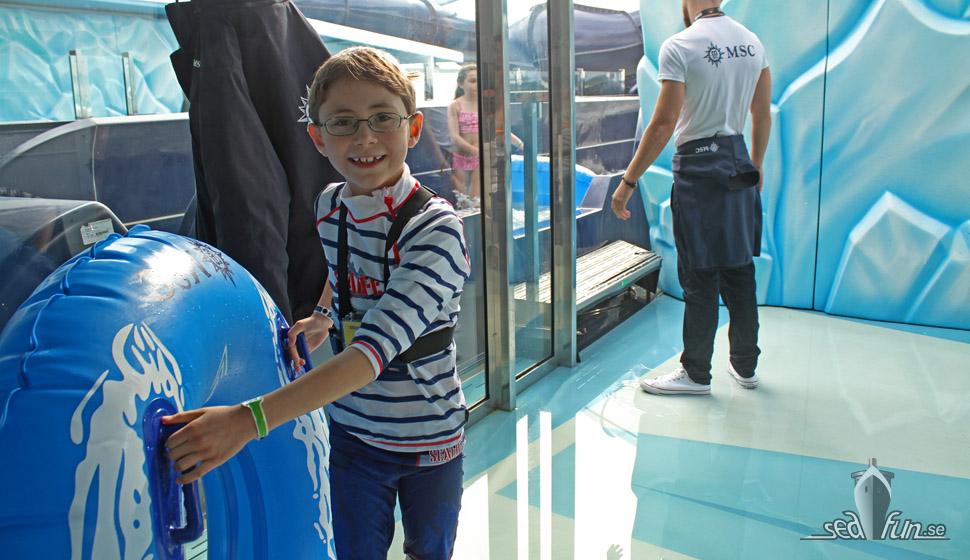 At MSC Bellissima, the Arizona Park Aquapark is named and has a different theme and colors, but all elements (canoes and play facilities) are identical. 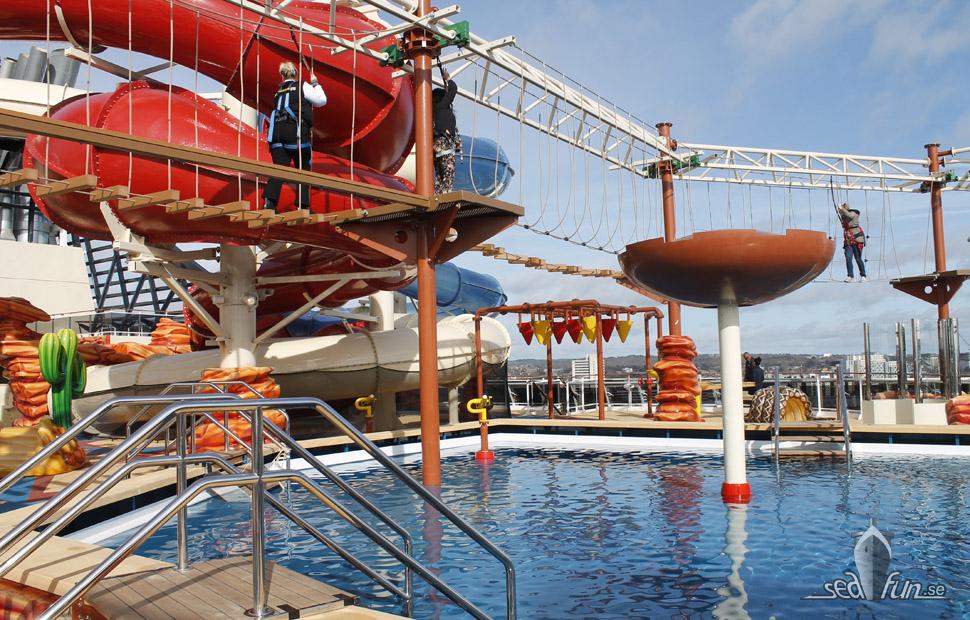 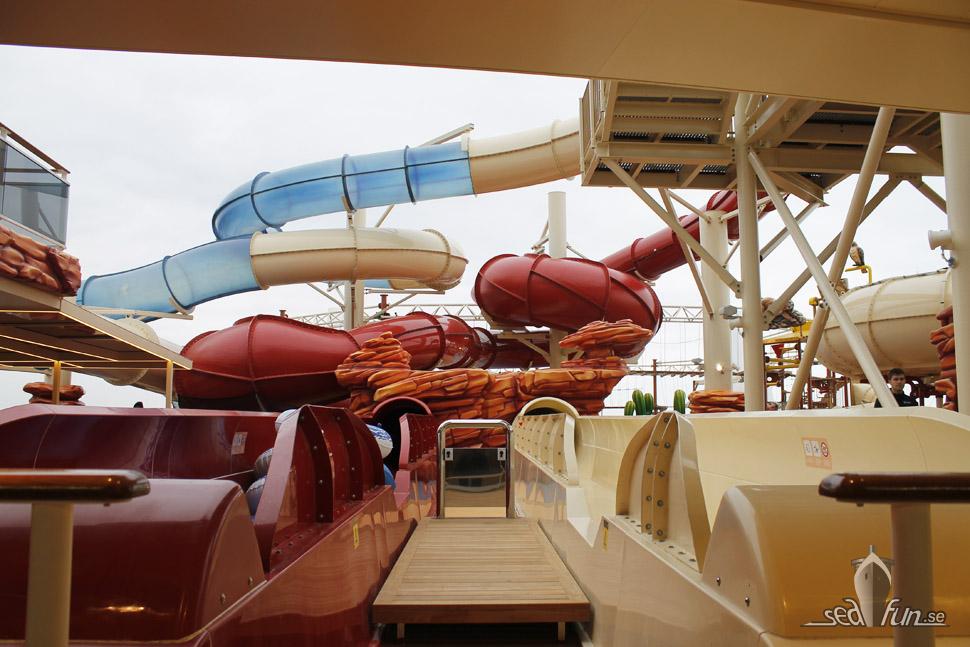 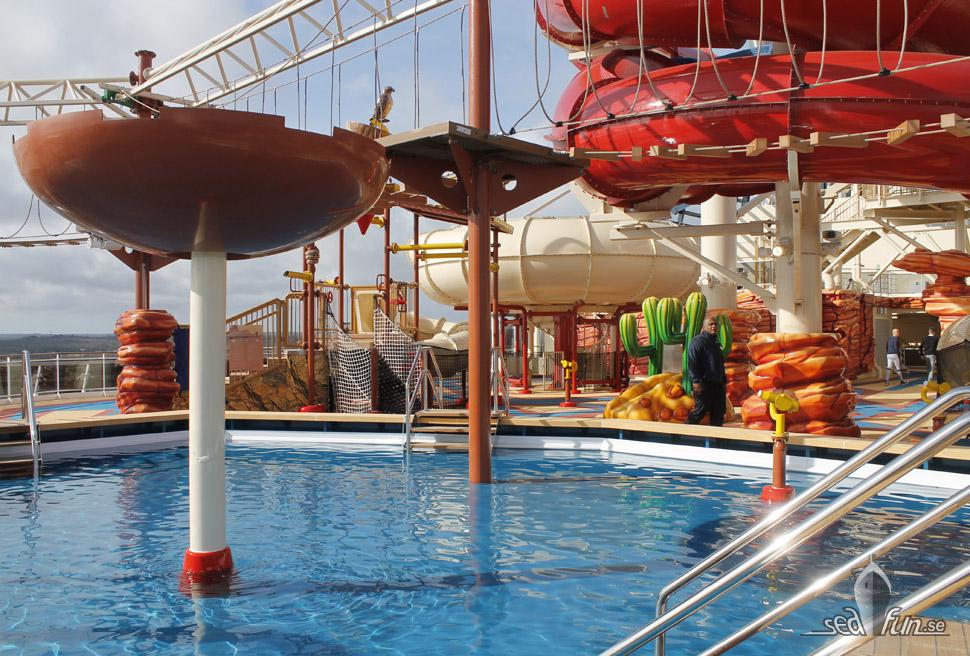 At MSC Grandiosa, the water park is called Wild Forest Aquapark and - as far as I could see - is also basically identical though the colors and theme are different. 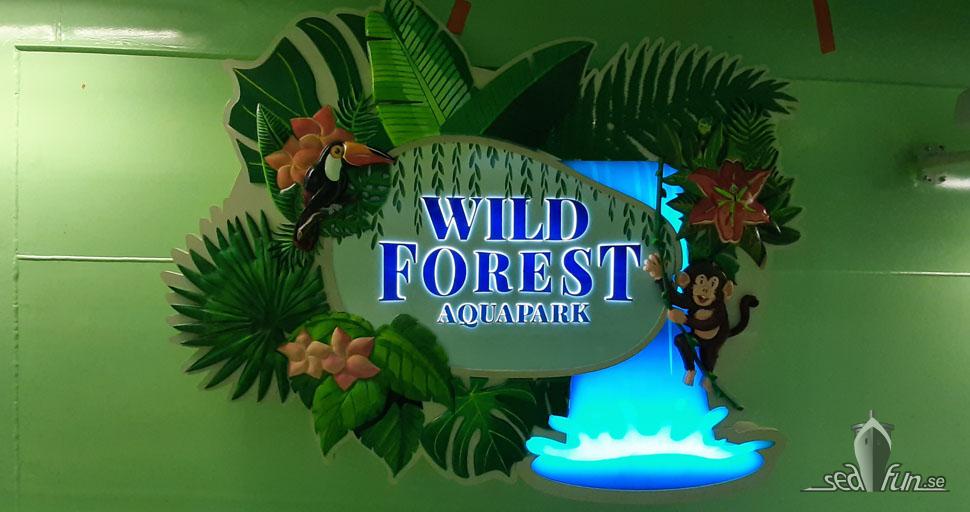 Forest Aquaventure park is the name of the MSC Seaview water park. This large jungle-themed play area spreads over several decks, but you can easily reach the "base" via deck 18 in the middle. At the bottom there is a pool with a "sponge" over which water flows, around the pool the water cannon is watered in a few places that you can spray water with, and there is also a tower with a huge water bucket that is filled to occasionally tip over. 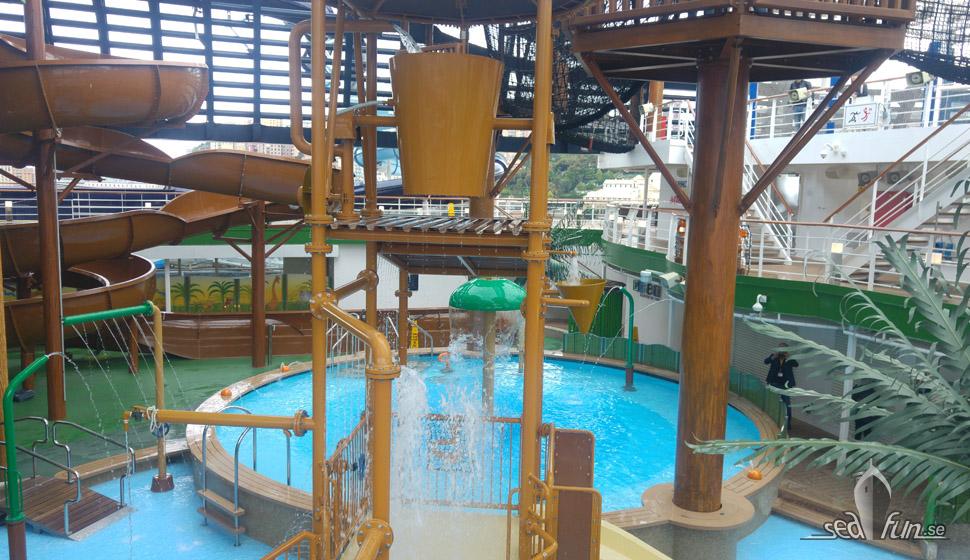 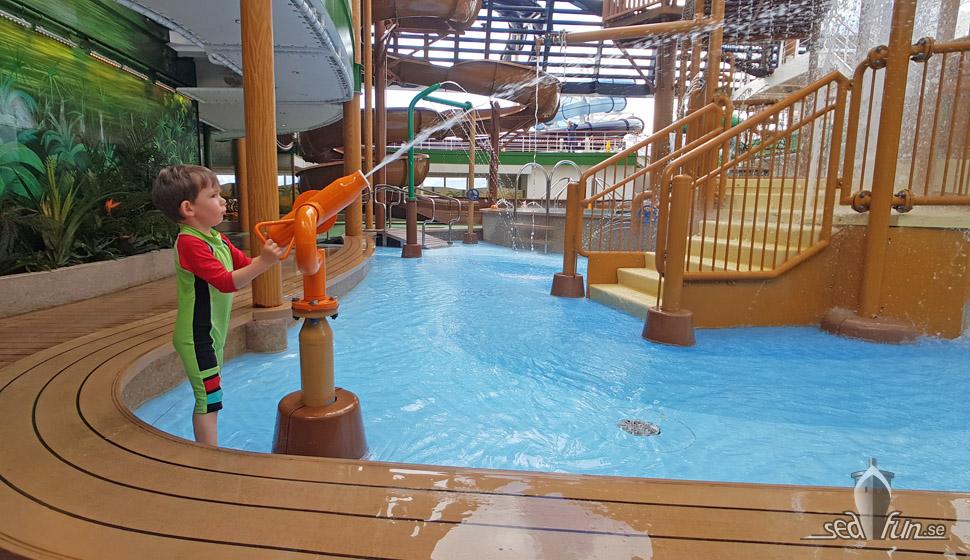 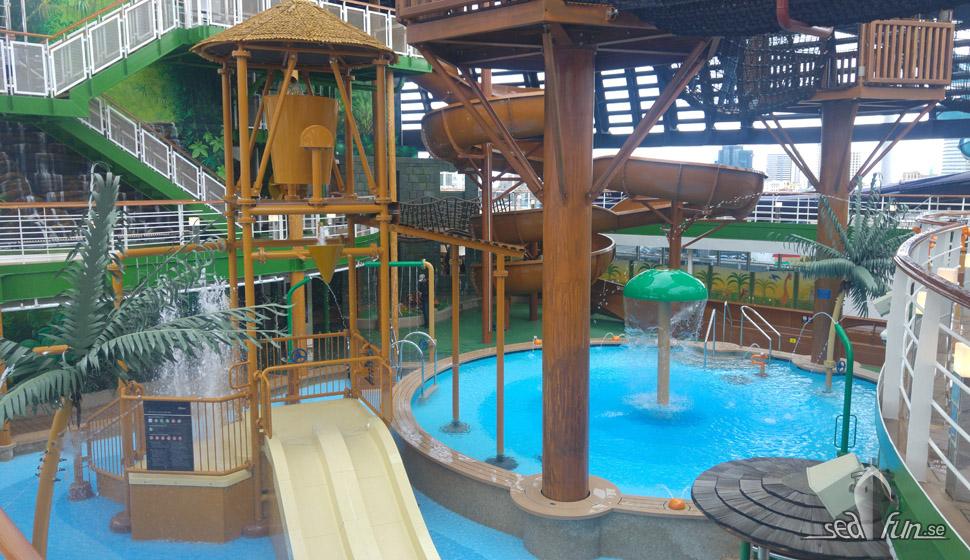 The water park has five different water slides that include mini-canoes for the youngest, a "regular" open canoe, two closed canoes you can compete in with partially transparent parts and a 111 meter long canoe with colored light and music. Here you go in a kind of raft (sliding board) and can set so that your results, how fast you go, are registered and can be seen by all the entire cruise week.

There is also a small play area with colorful characters to climb called AquaPlay for the little ones, and an adventure path at the top where you walk a path through the net while having the entire water park underneath. 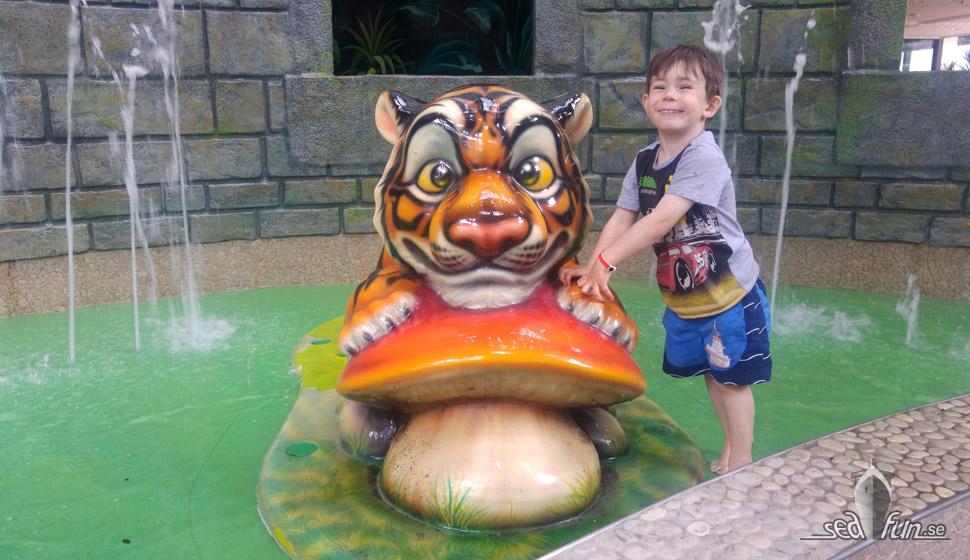 Which of the water parks is best?

Which of the water parks is best? Which vessel class should you choose? Well, that's not so easy to say. When we went to MSC Seaview in May, almost all water slides were closed all the time. Sometimes because of the weather and sometimes - maybe - because there were not many children on board who were there to go (kind of just us…), although it should not be, that they close because of too few children , so that's just a guess on my part. And the water slide with all the light and sound functions did not work 100 percent, which in itself did not do much - the son (then 8 years) had a lot of fun in it anyway. 🙂

Still, Forest Aquaventure Park is fantastic considering this is on a cruise ship! Yes, it would have been really good on land too. For slightly older children, this water part offers play for many hours with variety and challenges. For our youngest son (then 3) - there was not as much to do as he did not dare to ride the water slides (nor did I think, have read that one must be closer to 120 cm to go). 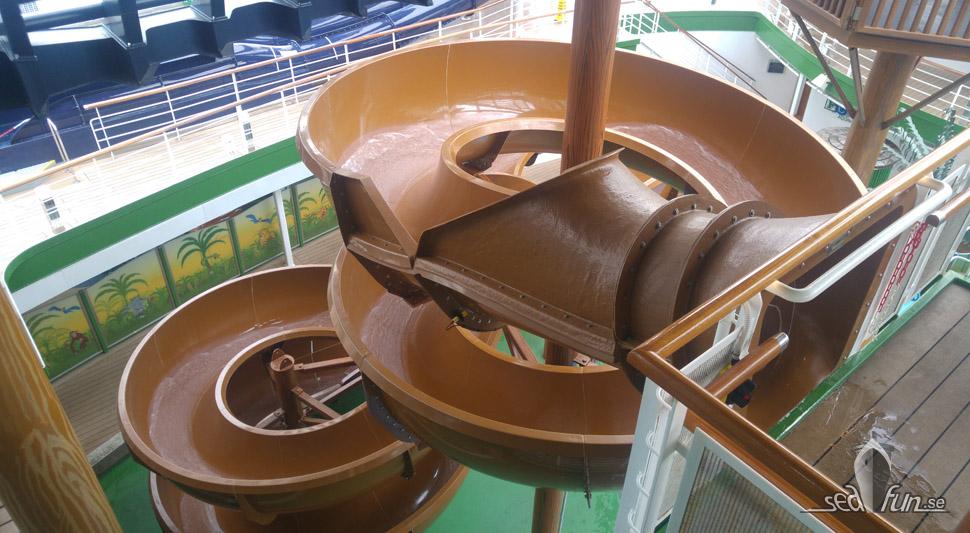 The entire water park is in the shade which can be both good and bad. Of course you do not want the sun to gas on the children so that they burn, but if it is not very hot in the air it will be quite so cool there in the shade with a little wind on it, especially when you are wet.

Our youngest had not been able to ride more water slides on a Meraviglia-class vessel (no one except the absolute smallest who has a type of turn), but here is the water channel I told about above that could probably maintain for a while while big brother went canoeing.

So - which of the water parks is the best, everyone can decide. The canoes are probably a bit cooler on MSC Seaview while the high altitude track is better on MSC Meraviglia (with sister ships), so it depends on what you want and what attracts. Why not test both? 😉

https://www.seafun.se/blogg/basta-vattenparkerna-hos-msc-cruises/https://www.seafun.se/wp-content/uploads/2018/04/MSC17010810_low.jpghttps://www.seafun.se/wp-content/uploads/2018/04/MSC17010810_low-150x150.jpg2020-02-17T16:44:02+01:00Heidi RovenBlogMSC BellissimaMSC GrandiosaMSC MeravigliaMSC SeaviewMSC VirtuosaPool and bathsaquapark, cruise, cruise ships, water park, water parks, water slidesFamily vacation on the wallpaper! Prio one: the kids should have a good time. And how do they have it, after all, there will be fun things to do and spaces for them to do it. And there should be good swimming opportunities (point out the child who does not like water play, they may be there but ...Heidi RovenHeidi Rovenheidi@cobertura.seAdministratorSeaFun